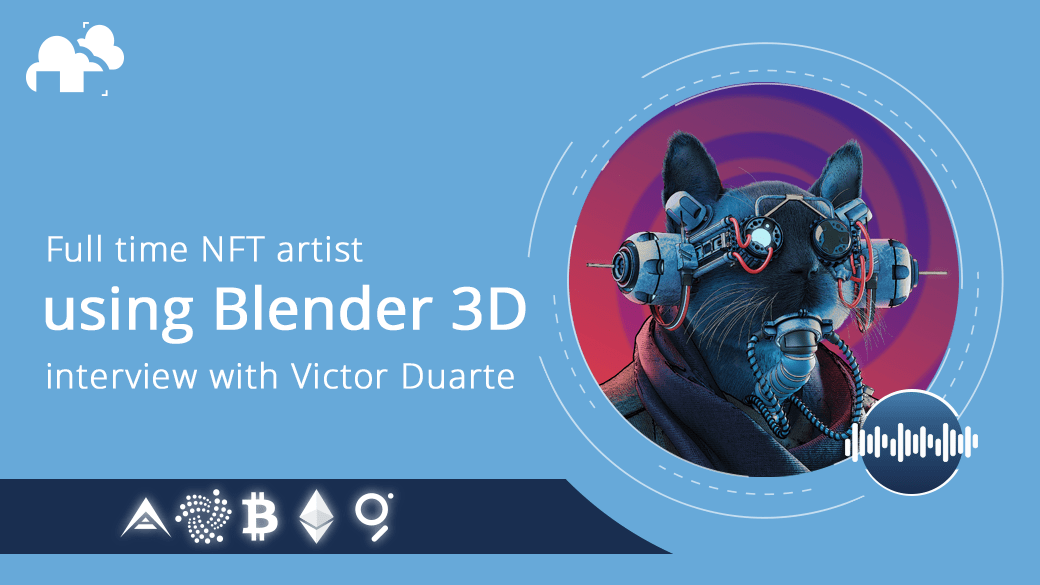 Months after Beeple’s revolutionary NFT debut with Christie’s, we’ve seen a steady growth of interest among 3d artists and content creators. We’ve seen some studios transition almost entirely to NFT creation. The transition towards a more sustainable blockchain is underway, and new NFT platforms for aspiring artists are emerging. What started as an expensive craze that seemed to profit celebrities and people with clout is now a seemingly viable means for actual artists and studios to make a profit from their hard work.

Victor is one such artist, whom we have had the pleasure of conversing and collaborating with on multiple occasions, and has graciously sat down with us yet again to discuss the new digital frontier of NFT art.

Victor is a 3d artist from Barcelona, Spain. He started a career in mechanical engineering but was always fascinated with digital art. His passion for the craft eventually led him to begin taking freelance work focusing on 3d architectural visualisation and mockups of spaces for events.

Sometime before the public eye turned its gaze toward Crypto Art in general, he was contacted by MakersPlace and invited to mint some of his work with them to be sold as NFT art in what perhaps was the earlier incarnation of the phenomenon we’re seeing today.

MakersPlace is one of the earliest NFT platforms that has amassed a roster of serious digital artists from various backgrounds. They have grown exponentially since their launch in 2018 and have reached around $60,000 worth in transactions as of 2020.

Like Victor, the artists selling on the platform produce quality work with a limited number of editions. MakersPlace charges 15% in commission for each sale, but rewards artists with a 5% royalty for every subsequent sale made with their purchased work. Collectors can buy art with Ethereum or traditional currency using well-trusted platforms like PayPal or Stripe. Perhaps one of the key characteristics of Makersplace that prove attractive to artists and collectors alike is the level of curation that goes into what works are sold on the site.

Victor recalls how there were no GAS fees in the beginning, and it was commonplace to mint hundreds of works at a time. He made 100 editions of one of his earlier works and has made 20 sales so far.

These days, he says, are much more difficult because of the expensive GAS fees and the overwhelming competition. He compares the artist’s struggle in creating successful NFT art to gaining visibility on Instagram, where skill, marketing savvy, and a willingness to pander to trends are all legitimate factors for a chance at the limelight.

Above that, there’s the sheer volume of digital artists to contend with, some of whom will inevitably outclass you. To Victor, selling your work as NFTs is precisely that, but with big money or at least, the prospect of a livelihood is at stake.

When asked what his advice to other artists is, he stresses the importance of being true to yourself and your work. He reasons that because it will have a place in the blockchain forever, your work should be something you’re proud of. It might seem a little naive, but there’s genuine wisdom in that, now more than ever.

The value of digital art is all too easily equated with engagement statistics. On the one hand, it’s a fair indicator of its effectiveness. On the other, it is also likely to be influenced by many factors that may not favour new or alternative themes or approaches. For artists looking to make art a full-time career, it would be all too easy to compromise their vision for the promise of better engagement, to a point where they may end up milling content instead.

Blind pandering will ultimately hurt the chances of making anything meaningful in a practical and actualising way. Perhaps when the haze of trying to get rich quick finally clears, it will be those like Victor that continued to make something of real meaning and value to them that will stand out from the rest.

What Victor is up to these days

Victor is determined to carve a place for himself in the digital art world through NFTs and more traditional avenues. He continues to draw from his love for Science Fiction and the surreal, citing Isaac Asimov and Moebius as some of his sources of inspiration. His work reflects his meditations on the future of humanity and the questions we face today and may face as our technology and ambition continue to grow.

He’s paused his usual freelancing work to focus on stories he would like to tell in the form of static images and loops. His Artstation account is full of fascinating glimpses of futuristic cities, mysterious forests and more symbolist work that focuses on the human form. He brings together these ideas in an ongoing series he calls Immemorial and plans to incorporate animations that will help to form a narrative or montage of his very own fictional universe.

According to Victor, the story of IMMEMORIAL takes place in an uncertain time and place where all consciousness is controlled by an Artificial Intelligence entity known only as "O.M.N.U.S". It is speculated that the migration of consciousness happened incrementally over a timespan - none can say how long because the AI had occluded all memory of humanity. For the most part, human beings are vessels driven by an artificial brain connected to a network and are simply referred to as "Bodies".

There are a few anomalies that have somehow preserved their natural consciousness. These humans would risk their lives to connect to memory servers to remember who they were as individuals and as a species. They fight to destroy O.M.N.U.S. and reclaim what's theirs to build a better future for all people.

Victor’s also found himself doing more writing than actual 3d production lately, and we’re excited to see the fruits of what he’s been cooking up.

We're happy to have been able to check in with Victor from time to time, and we have always been fans of his work and watching him grow as an artist. You can view our previous live stream sessions with him on YouTube.

We experienced some technical issues during the actual podcast, but if you'd like to listen to DJ's conversation with Victor, you may do so here.

To learn more about Victor, have a look at his website and works for sale!

CG Talks is a Podcast from the creative team of Garagefarm.NET. It airs once a month on average and features conversations about exciting developments in the world of 3d computer graphics and digital art and interviews with artists and CG professionals.