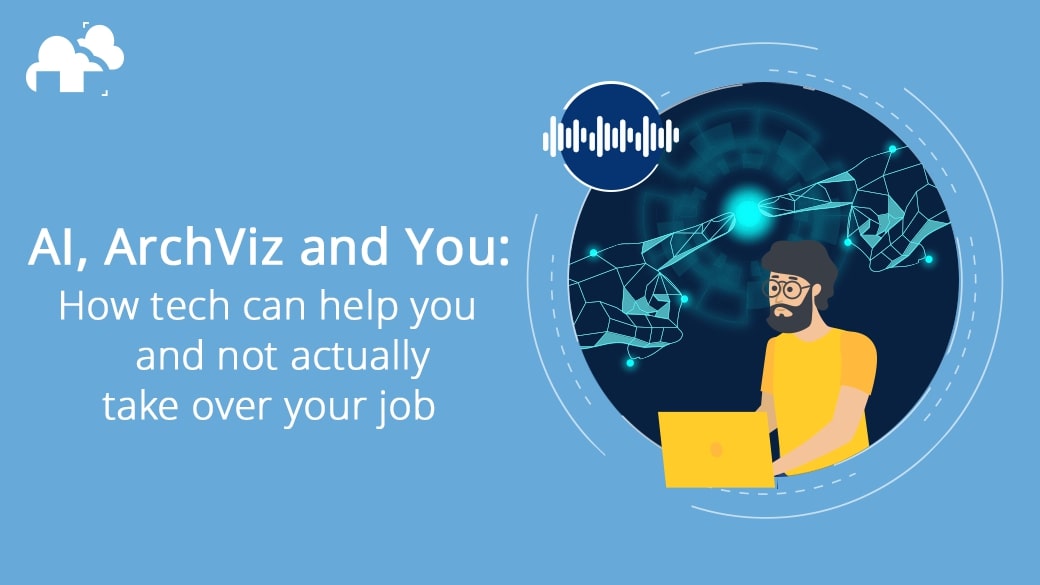 AI, Archviz and You: How tech can help you and not actually take over your job

The word “revolution” sure doesn’t have the same currency as it used to. Back in the day, crying “revolution” gun in hand down the dunes would have landed you in a cell. Nowhere else would you have to be so careful with your bar of soap.

Now, though, the word is plastered on billboard ads to sell you the latest lines of cars, shoes, and what have you. But is it only a marketing ploy, or do people sense that something profound is afoot? The hype is in the CG industry, too. Abound are toys, gadgets, and services promised to surpass the other and usher in a new era of 3D. The latest of which is the adoption of Virtual Reality and AI.

We’ve seen the movies. But let’s not jump the gun on robot domination just yet. As of this writing, a terminator has yet to come and assassinate Michael “Quick n’ Dirty” Konopski (the obvious choice to lead the rebellion), and there aren’t any cars flying overhead either. Still, we can’t ignore the threats computerization poses for future employment and deskilling.

With how often people fling the words “revolution” and “paradigm shifts” over these technological developments and promotions, it begs the question: for better or worse, how much of the 3D industry would be affected?

This was the tone in which our GarageFarm elites, Marco, DJ, and Tomas, gathered to talk about ArchViz:

First, let’s close in on what the big debate is all about. From the video above, the general scheme would be that all jobs would be replaced somewhere down the line. The output of the work we do is extracted as data for machine learning algorithms to get smarter, detect patterns faster, and eventually outcompete us. Even skill-based or high-cognitive jobs would become susceptible; the aggregate products of our work would be info for machines to read and then break down into systems of smaller tasks.

And why not? Machines don’t need sleep, don’t eat, and they don’t unionize, either. This logic is terribly bleak, though. The other side of the debate is that this reasoning doesn’t account for what higher productivity allows. Should policies and regulations be kind, smoother workflows may lead to new services and opportunities for better, more fulfilling jobs at a steady pace. This phenomenon is nowhere new. Today, people have found ways to make a living through 3D tutorials on Youtube. Just the same, more people have transitioned into Blender for Archviz at zero cost.

The immediate changes are what you find at the workplace. Increased productivity means expanding into different types of work. Tomas, once an inhouse architect in a small art studio, got into ArchViz because of all the sudden 3D tasks assigned to him by his former company. DJ, meanwhile, put his master’s degree in interior design to work, using 3D knowhow to enter the market. In both their cases, they found that because of the amount of time and resources required, ArchViz is a bottleneck in the standard workflow, prompting broad freelance opportunities.

While often outsourced, ArchViz is the crucial selling point. Not only is 3D better than blueprints, but it’s also the allure that snags clients: the high-fidelity renderings, in-depth lighting, textures — photorealism. The compounded effect is a varied array of prompts, depending on where the clients are in their own pipeline. They can provide freelancers floor layouts, 3D assets, or just a vague set of adjectives within a tight deadline.

3D Architectural Rendering has been around for decades, but it’s only recently that the industry has boomed. The marketing behind it hasn’t been all that forgiving. With each “revolutionary” product or service (like VR or AR), clients hold their expectations up high. The usual scenario, though, is that the client approaches ArchViz designers with a vague sense of how much the process costs. It’s up to freelancers to factor those in their pricing from the get-go.

So, going back to automation, the demand is highest in making more efficient workflows for users, not substituting us for robot professionals (yet). This aligns with Andrew Price’s 3D forecast during BlenderCon 2018 essentially, the jobs set to be displaced are the ones no one likes to do (grunt work, tedium, etc.)

Working smarter is one thing. It’s another to consider whether VR would substitute the old and change the game entirely. While no one knows what a lithograph is anymore, the camera didn’t replace the painting. Would VR dominate the commercial market, the way print replaced the lithograph? Most likely. Does that mean that their aesthetics are one and the same? Certainly not.

There are a lot of resources online that pose virtual reality as the new top dog. For good reasons, too. The ability to walk around a digitally conceptualized space and experience it is the stuff of wonders for departments of tourism. Artists can better storyboard their works; clients can have access to previews sooner, which would reduce turnaround times and miscommunication. It would also expedite things in the construction industry if standardized. Workers would know exactly what to do and where to lay down the wires, minimizing risks and occupational hazards.

Although, all bets are hedged on VR’s widespread appeal; its selling point is a complete immersive experience on part of the user. Although, whether for leisure or work, the price floor is still too high for the hardware to be integrated in this globally impactful way. Factors like frame rate, eye and motion tracking, as well as non-nauseating 3D stereoscopic renders still need to be fully fleshed out.

One might say, even, that streamlining workflows is what’s paving the road for VR. (Did you check out 3DBee yet?) There’s also software: real-time technology using game engines like Twinmotion simplifies things across the board, allowing for that immersive experience VR needs. As Marco observes, “assets that depend only on reflection and inorganic diffuse specular glossiness behaviors do well here — through triple-A games alone, we can see how closer real-time tech takes us to achieve photorealism.”

All to say that all fronts are being pushed. There are still improvements going on with classic global illumination, too. So, while switching to real-time tech is the way to go, right now that’s usually the case for larger companies that can afford it. According to Tomas, most work in the ArchViz industry today still requests for standard 3D rendering. That may likely be the case until the prices drop, in hardware, software, and services offered.

Architectural Visualization is an Art

Software out today like Lumion 10 make workflows easier and easier, and for just about anyone to do. That is precisely how automation affects us now. There will come a time when ArchViz is as easy or as intuitive as sculpting or drag-and-dropping assets in VR, or auto-generating different textures and template settings. But it would be wrong to think that we should just wait for VR to take off, or that the technological developments help 3D rendering workflows only incidentally.

There’s much to be said about 3D art today. Look at Landmark by Beauty and the Bit, a short film that features architecture front and center. A more general example is Sony’s Spiderman: Into the Spider-Verse, a 3D film that, for once, didn’t rely on photorealism to captivate an audience.

Like everything else in the 3D trade, the latest technologies are tools. As Marco, DJ, and Tomas agree, there’s much more time saved now thanks to software advancements. While that could mean taking on more ArchViz jobs, it also allows designers to focus on the creative aspects of the work tedium formerly prevented. Scene composition, mood, color grading — in a word, style.

And it’s in developing one’s style that would really make one stand out in the ArchViz industry. After all, it is and always will be a user-driven business. Trends come and go like the weather. Clients won’t always have a clear vision of what they want; ArchViz designers articulating that with proper taste can only become rarer from here on. Sometimes, a quick dirty sketch that gets at the heart of what the client wants does the job just as well as an elaborate, photoreal scene.

But how does one develop an artistic style for ArchViz, anyway?

For DJ, Marco, and Tomas, it’s these:

Curious to know more? Check out our take on style in our next discussion on archviz portfolio. If you enjoy listening to discussions like this as well as reading them, check out our podcasts on this topic and more, over at any of these platforms:

For now, thanks for reading. Here’s a sweet jam: 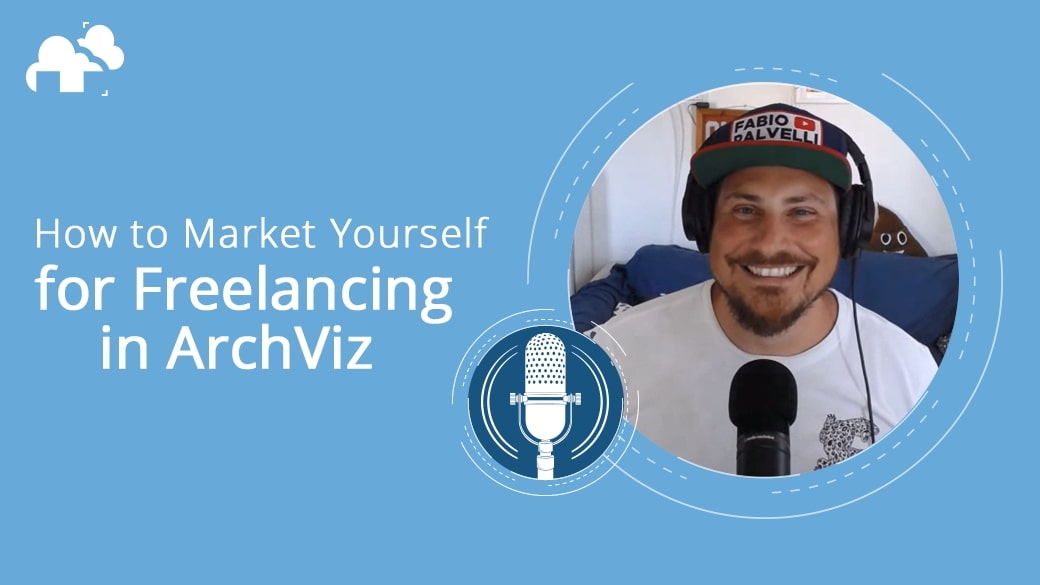 Having trouble landing decent jobs? Yeah. We sat down with Fabio Palvelli for strategies, answers, and some hard truths.