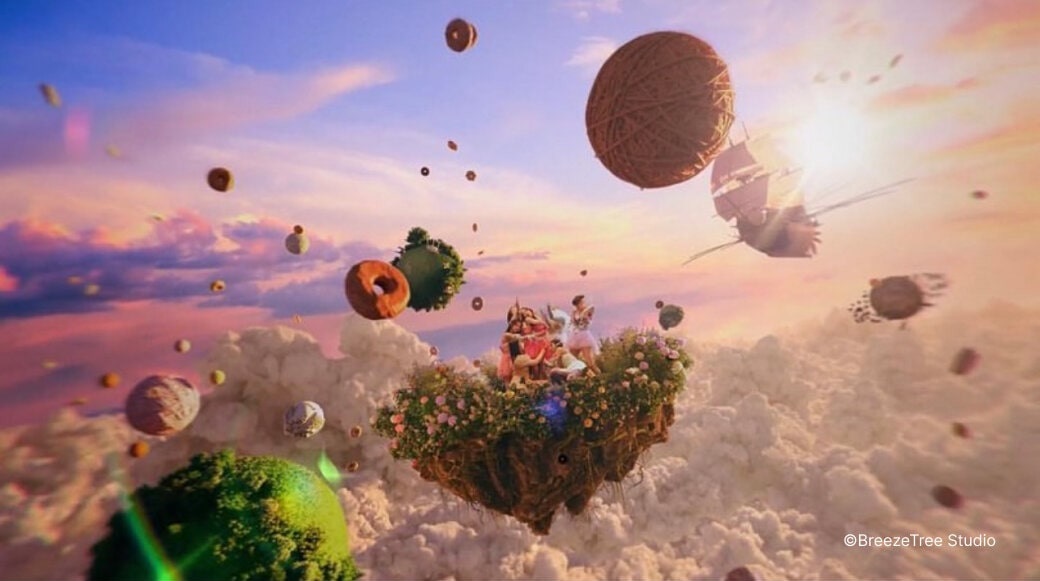 Breezetree, K-pop, and the push for new media in S. Korea

The K-pop genre of music is known for its unique, hip-pop-inspired style that has drawn fans worldwide into Korea's art and culture scene. In the past decade alone, the K-pop industry has quickly become a world phenomenon, with artists like BTS completing world tours and gaining international fame.

A 2019 Global Music Report showed that K-pop is among the top six music markets worldwide. The industry's rapid growth brings many challenges, not least the growing demand for high-quality innovative visual content and music videos to accompany artists' work. And CG is no small part of this. In K-pop, it's hard to find a music video or concert performance that doesn't feature 3D visuals.

In the past, we featured a VFX firm Plastic Beach in an article about the growing world of K-POP, but our interest hasn't fizzled out. So today, we're hearing from the studio Breezetree about the challenges of working within the Korean music industry and the need for online render tools like GarageFarm that can keep pace with the growing needs of the industry. If, like Breezetree, your team is looking for an online rendering solution, check out our render farm for free $25 render credits.

Ji Woon Kim, the founder of Breezetree, graduated from college with an engineering degree but had a strong passion for the 3D arts which led him to pursue a job in CG.

‍"I majored and graduated in engineering and went on to major in 3D animation in graduate school. I started working on music videos by chance, which has continued until now. I started as a freelancer from the beginning, and I didn't have any seniors or juniors in the industry, so I struggled a lot at first, and I still wonder sometimes if I'm doing things right or not."

He started working in the visual effects industry in 2012 and soon after started Breezetree, a one-man-band VFX Studio with a focus on producing music videos for the Korean music industry. Ji Woon explained to us that the worldwide growth of K-pop in recent years has had a major effect on how media productions are produced. What was once a small, niche industry is now coping with holding the attention of millions of fans.

‍"About ten years ago, 3D was only used in limited ways in some music videos because the budgets for producing [K-pop] music videos was much lower than that of other media content. Most people had little experience with how far 3D could be utilized. Now, K-pop has become popular internationally, and the budget for music videos has risen so that we can try a variety of techniques. So now 3D has become an essential part of music videos."

The start of a worldwide phenomenon

K-pop made its first appearance in the 1990s as a niche genre for Korean teenagers, but in the past twenty years, the industry has grown alongside the internet and the increasing demand for new music styles. K-pop "idols" like BTS, Blackpink, and Psy (who produced the first YouTube video to pass one billion hits) have pushed the genre forward to breach the limits of being merely a Korean interest. Now, K-pop can be heard on radio stations and smartphones across East Asia, Europe, and the US.

"Worldwide" was an unfamiliar concept for K-pop 10 years ago, but now K-pop idols want to show their global perspective. 3D and CG, which have become the only way to represent fantasy in live-action music videos, have become an essential element."

Breezetree also told us about how the Coronavirus Pandemic pushed the industry, and his studio, even further into growth. A decrease in live preferences led to increased demand for new content.

‍"Due to the Corona crisis, singers' performance activities decreased, and as a result, many albums were released, which shortened the music video production cycle. Thanks to that, we have a lot of work."

Suffice to say, K-pop is booming.

So how do render farms factor into the growth of K-pop? Well, the more music video studios like Breezetree develop, the more render resources the industry needs. A render farm allows artists to offload the heavy processing tasks of rendering off to a cloud-based server that can scale to a project's needs. In an industry where supply chain issues for equipment are increasingly unpredictable, renderfarms can provide some serious advantages.

Breezetree has been using GarageFarm's services since 2016 to render visual effects for the music videos they help produce. Breezetree says that, on average, the studio produces 30 music videos yearly. Their most recent project was for the South Korean idol girl group NMIXX of JYP Entertainment, the music video "OO" M/V.

‍"It was the first album for a big agency idol group, so a lot of money was spent on it, and the CG took the most amount of work in all the videos I've ever worked on over the past decade."

‍"I worked on a total of 200 cuts, but it's about 60 frames per cut on average, and there are as many as 5 or 6 layers per frame, so it's hard to calculate accurately. It wouldn't have been possible to produce it without using GarageFarm."

Projects like the one for NMIXX are a big task even for larger studios, but the one-person studio Breezetree can produce quality content quickly without wasting time on maintaining render infrastructure. Furthermore, online render farms allow artists to use next-generation rendering tools without spending the money to upgrade their own systems to render large projects.

Breezetree  uses the 3ds Max and V-Ray for most of his work and brings in tools like Houdini, a procedural effects tool when he needs them. For NMIXX’s music video, Breezetree had a tight deadline to complete all 200 shots. To give context, a typical project timeline for a music video is just 1-2 months from concept to final release.

‍“The greatest difficulty was that the production deadline was too short. The scene needs to be done with a terrible schedule, finishing nearly 200 cuts within 50 days, so it was physically and mentally very difficult. But I'm so glad the results came out well, as I worked hard on it.”

The music video is for NMIXX’s debut album and was directed by Sung Won-Mo of Digipedi, making it an important production for the client.

‍“Since it was NMIXX's debut album, pre-production was long compared to other projects.  For each part, we made a thorough storyline to determine what kind of CG we would need to implement according to the movement of the artist. Then we filmed it as it is and worked on the CG. However, depending on the scene, it was often impossible to proceed according to the script. In that case, we discussed with the director and discussed what angles and movement went well with CG.”

Breezetree’s team first heard about GarageFarm from a collaborator on a project and slowly began implementing the render service in the studio’s work from there.

‍“I heard that there was a relatively reasonably priced renderfarm (GarageFarm) and with the introduction of the director in charge of the project at the time, we used it for the project. It's affordable, I like the 24-hour support, friendly staff, and how easy it is to use.”

“Due to the short production schedules of music videos, rendering time was always a big problem, but after using GarageFarm, I didn't worry about rendering time at all. I'm recommending [GarageFarm] a lot, but I also have a small desire to keep it to myself [Laughs].”

Breezetree also explained that the 24-hour support offered by GarageFarm allows them to work at all hours without worrying about waiting to render or receive support during business hours.

‍“Due to the nature of my work, I often work at night, and it was nice to be able to get support service even if there was a problem during the night or if I wanted to purchase credits late. There was one time when I had a problem with the server not working correctly and I was able to find out more about the situation through the 24-hour customer service.”

The future of K-pop & Breezetree

Breezetree expects the demand for CG-heavy music videos to only increase as CG elements have become a staple of Korean pop music. The trend toward digital media across the world is opening up new opportunities for artists to expand into developing social media content and content for the metaverse. The team explained to us that, in their view, the future of the metaverse is largely dependent on how the public receives the new medium.

‍“Honestly, we’re still skeptical about the metaverse, so I don't know how much this will affect our industry. But many Korean entertainment companies are trying to do something that incorporates the metaverse, but we don't think it's very convincing to the public yet.”

In regards to technologies, Unreal Engine is slowly starting to emerge as a new tool for studios like Breezetree to create not only music videos but metaverse content. Interactive tools are becoming increasingly popular for their ability to rapidly prototype new projects in real-time.

Breezetree is currently working on the debut music trailer for a rookie K-pop idol. The studio is still just a one-person studio, but Breezetree brings in additional artists as needed. This year, they’re hoping to expand the studio to hire one or two additional full-time artists to help.

With what seems to be an ever-growing demand for K-pop and its larger-than-life allure, the demand for CG and consequently renderfarms, in the industry is only growing stronger. GarageFarm looks forward to supporting the industry by providing top-of-the-line rendering tools and support for studios like Breezetree.