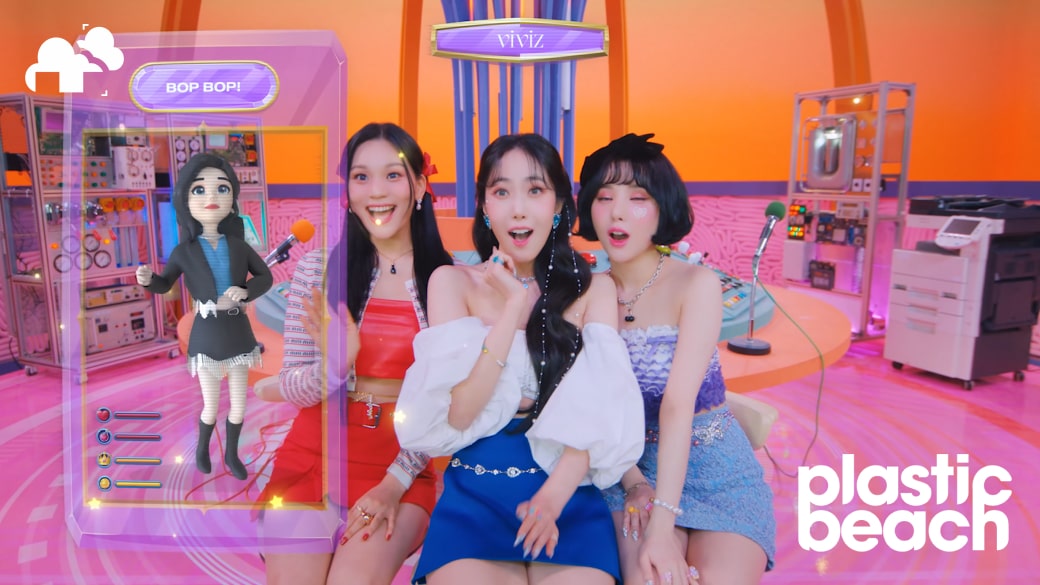 BTS, NCT 127, ATEEZ, TWICE, Xdinary Heroes--these are some of the repeat topnotchers of the Billboard K-Pop 100. They are also some of Plastic Beach’s 3d clients.

Song Chan-young has come a long way from working as a freelancer in 2015. In such a relatively short time (he officially formed Plastic Beach as a company only in 2019), he and his team have accumulated pretty much all the who’s who of the South Korean pop music scene and created a whole array of music videos for them. As K-pop was taking over the world, Plastic Beach was taking over the K-pop vfx scene.

Chan-young did not exactly set out for world domination. When he and his co-founders met at an after-school club in South Korea, they were just there to study. It was during that time however that Chan-young and the team “accidentally” started working on music videos as a freelancer. How an accident like that could have happened Chan-young did not elaborate, but it’s definitely safe to say that had that accident not occurred, K-pop music videos would look very different today. Since then, he expanded the team to include 15 people that he met in that club.

When it comes to K-pop, the artists and the songs may be the ones that first come to mind. But the visuals in the music videos do a lot of heavy lifting when it comes to making the whole package relatable, desirable, and exciting for a global audience. When BTS launched the music video for Butter, millions of people tuned in to the live video of its countdown. If the music video itself failed to amaze, those millions would have been gravely disappointed.

Worse, imagine if Chan-young and his team failed to complete the video in time. Take another example from Plastic Beach’s amazing body of work--Xdinary Heroes’ music video for Happy Death Day. On average, it took 3 to 6 hours to render a frame. Chan-young had to render more than 1000 frames for the project. If Chan-young didn’t have the help of our render farm to render these frames via the cloud, the project would probably still be rendering today.

Especially for a lean-and-mean team like Plastic Beach, an online render farm is an absolute must-have in their workflow. A small team like theirs find it difficult and costly to put up their own rendering farm. It also takes a lot of time to maintain rendering machines, time that could otherwise be used for actual creative production. Tapping a GarageFarm made absolute sense for Chan-young and Plastic Beach, especially in the music video industry where deadlines are often shorter compared to other fields like, say, architectural visualization.

Time-efficiency and cost-efficiency aren’t the only reasons why Chan-young chooses to work with GarageFarm for Plastic Beach. Having a tech support team on hand 24/7 has proven to be a lifesaver multiple times.

Back when they were working on the Dynamite music video for BTS, Chan-young and his team encountered a problem uploading a large-scale FX scene cache file. With Korea Telecom's daily network speed limit, it took a lot of time to transfer large files. But thanks to a solution found by the tech support team, Chan-young completed the project on time. GarageFarm’s tech team made sure that the files went through successfully as Chan-young’s team uploaded each file separately and manually.

“I think it's the biggest strength of GarageFarm,” said Chan-young, referring to the tech support team.

“While other render farms are slow to respond and only give typical answers, GarageFarm was good because there were many actual experts who actually solved the problem.”

While there’s always a K-pop music video on Plastic Beach’s plate, Chan-young and his partners are looking to break into the world of NFTs. They have piloted a website called TOCOTOUCAN, basically an auction site for the NFTs of digital artworks. It’s still early days for their platform, but Chan-young is very excited about it. “I think NFT can completely change the digital art industry,” said Chan-young.

They are also looking at creating and publishing Profile Picture NFTs (PFP NFTs). PFP NFTs is a recent trend in online platforms where users’ actual profile pictures are connected to ownable NFTs. Some PFP NFTs, like the one of Adidas partner Gmoney, have become so popular that it has almost become an influencer in its own right.

Chan-young’s goal is to connect the world of K-pop with the world of 3d and NFTs. “We are aiming to conduct various experiments in the field of visual assets that we are good at. Currently, we are preparing a new brand that connects the characters we created, NFT, and offline space,” said Chan-young. “NFT is currently the hottest issue, and ultimately we aim to create an ecosystem where all digital artists can grow and be self-sustained, not relying on others.”

If you want to know more about NFTs and how it relates to digital art, you can read our article about the history of NFTs.

Chan-young also thinks volumetric capture technology will be a game changer. What the technology does basically is it captures the space itself and converts it into data as opposed to what normal cameras do, which is to capture footage of the space. Once the space itself is captured, most of the work will be done in post instead of holding a camera and shooting in that space. This technology will dramatically lessen the time used for actual video shooting and give filmmakers access to camera angles and movements that are simply impossible using real cameras, like shooting below ground level or seamlessly pulling out to a super bird’s eye view shot.

These may all sound kind of “out there” right now. But this is Chan-young we’re talking about, the man who went from freelancer to K-pop 3d overlord in just seven short years. Don’t be surprised if Chan-young turns all of these into reality faster than you can sing “side step right left to my beat.”

Chan-young and his team use 3ds Max and V-Ray, and they like plugins like ForestPack, Phoenix FD, and Tyflow.

If you are interested in rendering a project with GarageFarm or if you simply want to know more about our cloud solution for 3ds Max, check out our 3ds Max render farm.