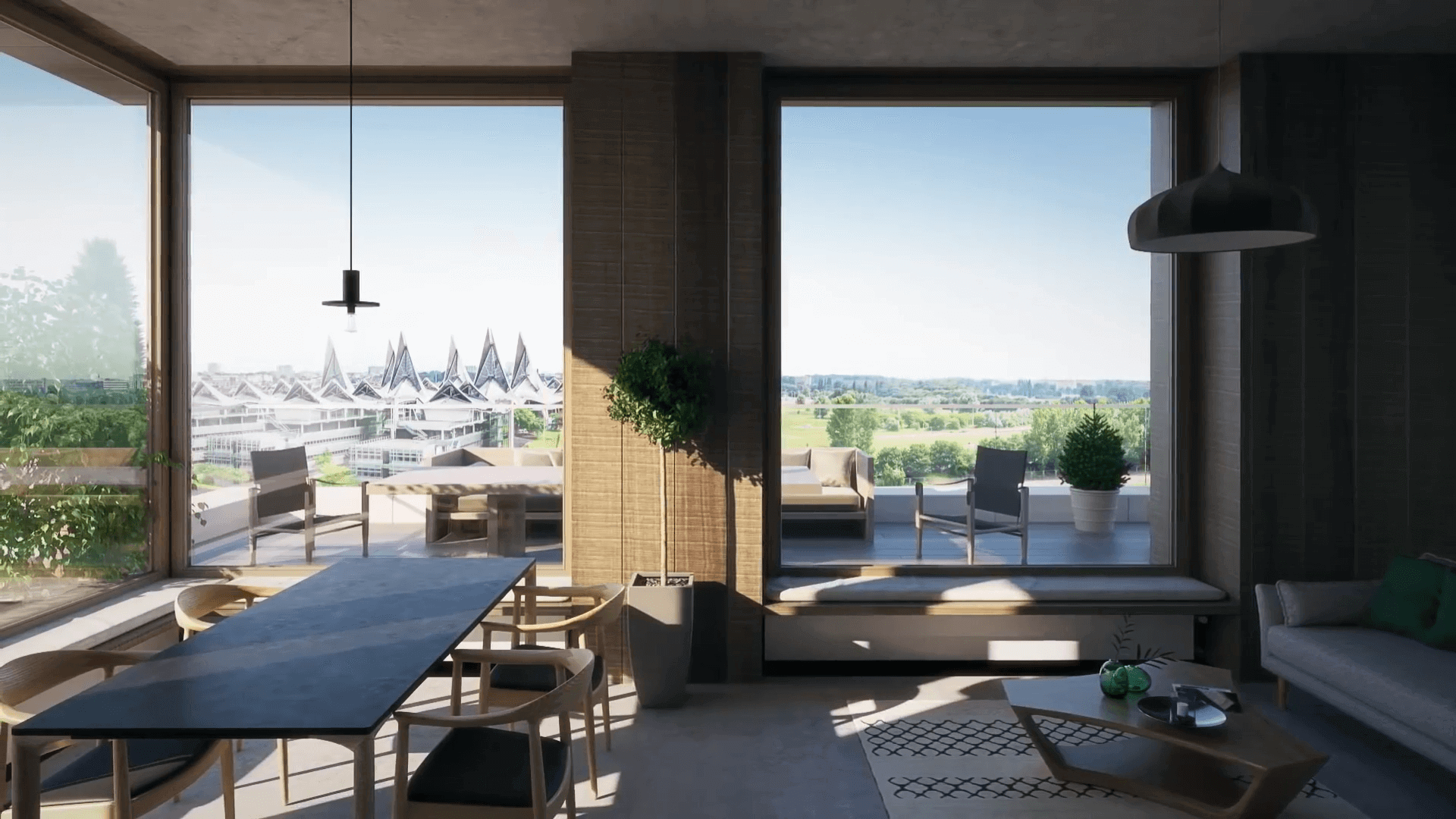 ZOA’s main focus is on creating stunning Architectural Animations along with the imagery which are not only top visual quality, but also tell a story and tend to touch people’s soul.
ANDRAS ONODI, FOUNDER OF ZOA3D

There are numerous companies and freelancers out there that do architectural visualizations. Many of them do an outstanding work creating quality imagery. It’s not easy to break out and distinguish yourself from the crowd. ZOA3D’s approach to creating stunning architectural work is focusing on both top quality design and art. Their secret lies in storytelling, and their ability to use creativity to convey the story in ways that please the eye, astonish, and leave you with a sense of wonder. Andras, one of the co-founders of ZOA3D, says that creating a work environment and team dynamics that allow creativity to flourish is key to their success. We talked with Andras about emerging technologies in ArchViz, ZOA’s future, and his advice to new CG artists among many other things.

ZOA rendered an 85 second animation on our render farm. It was a visualization of a luxurious apartment building that utilized a lot of vegetation and presented detailed interiors all rendered in 3ds Max and Corona.

My name is András Onodi, I am living in Budapest (Hungary)

What do you do professionally?

Can you tell us about ZOA3D, your role in the company, and the team?

I am currently operating as the CEO of the company. Alongside with my partner – Máté Hámori – we manage everyday life: covering areas from overlooking offers, managing resources, planning office life up to making strategic decisions. My personal focus currently is marketing, sales and client relations.

What’s your typical market and type of work you do for you clients?

There are plenty of Viz companies and Freelancers out there doing great images. ZOAs main focus is on creating stunning Architectural Animations along with the imagery which are not only top visual quality, but also tell a story and tend to touch people’s soul. We feel that teamwork and cooperation empowers creativity and we encourage a great deal of communication inside the office to let that happen. We try to avoid having rigid workflows and keep our minds as open as possible, while dealing with new projects. We strongly believe, that this behaviour is one of the keys to creativity.

How did the journey in this field start for you? What drew you to it?

I first saw the DOS version of 3D Studio 4.0 in 1994 during secondary school at a friends place. This Friend – László Sebő – is and have been Employee Nr1. of a VFX Studio in Canada ever since then. He gave me lots of input during my University years at the Architectural Department of the Technical University here in Budapest. Using PCs as part of our curriculum was not so OK back then, everything had to be done by hand drawing, and if someone was using a Computer to show his design it usually happened with ArchiCAD. ArchiCAD was (still kind of is) stuck in using generic objects like walls, slabs columns etc. 3ds Max, on the other hand, is purely about form, and this freedom gave a lot of inspiration in the design courses I attended. It was this elementary sculptural freedom that kept me working days after days on my own design projects. Although showcasing the final result was secondary, it was a lot more eye-catching than anything else seen done in other software back then. It did not take too long until I found out that I could earn a living that way.

Can you talk about your initial experience with CG and the early stage of your career?

The first big project I participated in happened in 2000 – we had to showcase the gothical stage of a former Castle in a town called Esztergom. The video was created in a super-resolution of 720*576 with a pixel aspect ratio of 1.067. What? I still don’t get this pixel aspect ratio thing. Haha. The 4-minute video was produced in 2 months during the hottest summer and was mainly created by the former 4 founders of ZOA. It is funny to think that these 4 people were able to recreate that movie in about 2-3 weeks now. The core team of ZOA has worked together since 2000, and animation projects always used to be on top of the list when it came to enthusiasm.

Can you talk about the most meaningful or challenging project your team worked on?

We are always trying to be on the verge of our capabilities, and I believe that “challenge” and “meaning” are things that come from an inner motivation. The most challenging projects are the ones where you head into and keep yourself working 10-12 hours a day for weeks. There are always projects where the “architecture – budget – time” golden triangle feels just right, and we head into it without any doubts. I am really proud of the projects that we have created for the Nieuw Zuid development in Antwerpen:

Lately we have finished our first large scale animation for a developer in the US, which I think is a great breakthrough. Unfortunately, at this point, I can’t tell you more about it.

What’s next for ZOA? Where would you like to see it in the future?

In about 3-4 years we would like to double in size – meaning going from 16 people to 30-35. We have put a great deal of effort into creating a company structure that lets us deal with this number of individuals without having to fear that we’re creating something too rigid or too industrial. We are definitely keeping our eyes on Architectural Animations as this is our passion. Another thing is emerging technologies: we currently have a VR App under development and other cool online tool that we call “Flatchooser.” We are also thinking of undertaking complete marketing solutions from web pages to brochures.

Can we talk about the projects recently rendered with us?

Tripla – Building complex in Helsinki
One of the biggest real estate investment companies in Europe, YIT, asked us to create animations about their recent project in Helsinki. Our task was to show the different ways of possible transportation types and how you can manage to get to some important public areas inside the complex as well as showcasing the interior design of some offices there.

The most difficult part of the project was the size of the complex itself as the Tripla building is 50 times bigger than a football field. Working on scenes this heavy needs some proper optimization and management to keep render times reasonable.

For almost three years now we’ve been working with Triple Living, a Belgian Real Estate company, which is responsible for the biggest urban development in Antwerp called ‘New South’. Our most recent project was to create an animation of the elderly home called ‘Schelde 21 designed by VincentVan Duysen Architects‘, to showcase the mood and architecture of the building. Fortunately, the client was open to our ideas of creating a moody and slow paced imagery, introducing the atmosphere of the Schelde riverside and the building itself. The combination of slow camera movements and dynamic (timelapse) elements worked well together, and created a very decent effect that allowed us to approach this animation in a much more artistic way.

Let’s talk tech details and typical tools you use.

The Tripla animations were like 70 seconds on average, including a 15 sec “infographic” introduction of the whole project. We’ve created a total number of 6 animations in 25 fps, so total frame count is around 10,000 frames. All in all, from the beginning of modeling to the delivery it took us around 4 months to finish everything.

Schelde 21 animation is 85 seconds long, so it’s ~2000 frames. Some of the shots were heavier than others mostly because of the vegetations. We always try to optimize our renders so it doesn’t take more than 60 minutes to render per frame (on our i7 machines), but it really depends on the scene. Our machines have 32GB of memory, and we always tend to consume all of that somehow.

We use 3ds Max for modeling and creating our scenes, and the animations mentioned above were rendered with Corona. A lot of additional plugins were used like Forest Pack / Corona Scatter (for vegetation), Populate (for timelapse people), FloorGenerator, etc. Nothing special, just the usual stuff.

Do you normally use cloud render farms to do your renderings or have one in-house?

The demand for rendering power is not constant in our office. It is derived from the overall workload and the upcoming milestones/deadlines. If we scaled our render farm up to our highest workload, I would be screaming about the money we have spent while it is not running at all time. Right now our own render-farm is utilized in about 80-90%. I think this is the right moment where the though of “whether to buy a new Xeon or whether to let it render on a cloud service” starts making sense.

Any observation on architectural visualization and how it has evolved over the recent years?

The exponential raise of quality in imagery is astounding. It is also amazing to see how both pure-Maxers and Photoshoppers find their own way to show extraordinary quality. There is no rules for a great image or animation, which again proves that this is pure art.

VR is a great thing. Right now, the whole industry is struggling with how to get it to the end consumer. Once this gets solved, the VR scene will be unstoppable. We are also working hard to stay on top of the trends. ZOA is developing an app that has multiple outputs: 1) on web, 2) on a mobile phone working as VRs on Facebook and 3) on a Samsung Gear VR. A beta demo can be seen here: http://zoa3d.com/vrezy.

Architectural Visualization, is it mere design or art? What comes first?

I don’t really get the question. I think design is a form of art. Visualization is art at its best. It is a very typical kind of applied art where you first have to understand all the given aspects: geometry, built- social- and cultural environment, sales strategy etc, and then try to forget about all of it and at the same time try to put all of it onto a pic/animation.

How did you find GarageFarm.NET initially?

You just sent an email and we tried your service. It is as simple as that :) We regularly experiment with new providers to find the best, fastest, and the most reliable service out there – not only when rendering but also with some of the lower profile bits of 3d work we do.

What were your initial impressions when you first started working with us? Overall thoughts on the service?

You guys have a greatly competitive price compared to anything else on the market, and a well laid-out interface but on occasions we had the feeling that oversight and management of those machines should be improved so that you can deliver a 24/7 reliability every week of the year.

Tips to CG Artists out there who might be struggling finding their way?