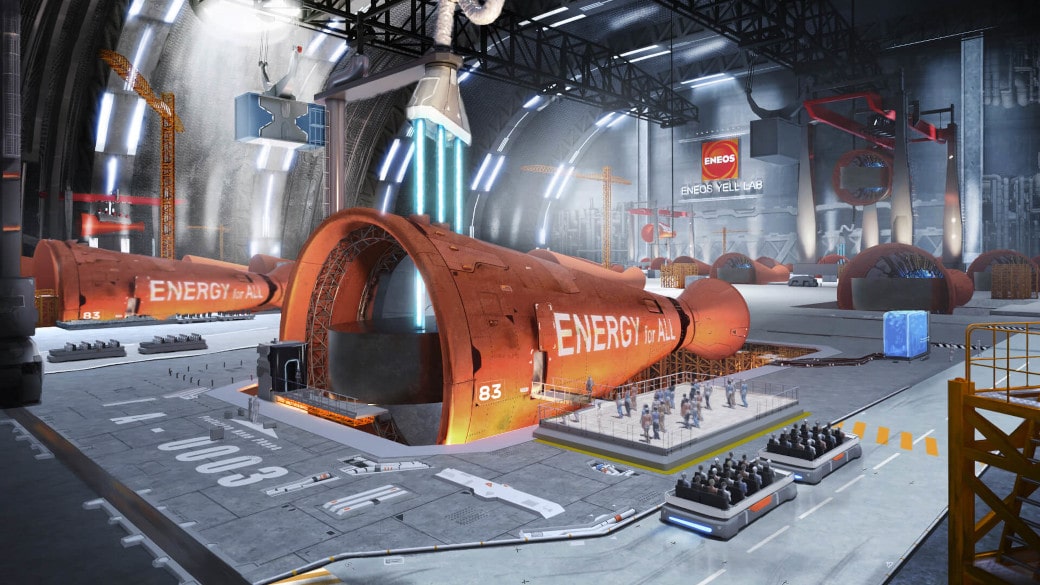 Designing 3D graphics for normal screens like TVs and laptops and mobile phones is hard enough. Designing them for screens that are twice the size of humans or screens that twist around gallery spaces, or spherical screens is a headache, to say the least. But what may be a headache for many 3D artists is simply all in a day’s work for CG production studio DARUMA.

That’s not to say large screen graphics are all that DARUMA does. They do all sorts of CG output from 2D animation to product showcase visuals to self-folding origami sequences to…it’d be easier to show you:

But it’s DARUMA’s 360-degree screen work that stands out, especially among the wide range of projects that go through our online render farm. It’s not everyday that we encounter artists that not only design stunning visuals but go beyond the visuals to create immersive experiences.

You see, with visuals that are meant for TV or computers or mobile screens, the perspective of the viewer is fixed – the viewer is always directly in front of the 2-dimensional screen. But what happens when you have a screen that goes above the viewers’ eye level or twists all around them (sometimes even under them!)? DARUMA’s artists don’t just need to make the visuals work on the screen; they also need to consider how the visuals will appear to different viewers in different positions relative to the screen and make the visuals work for all of them.

Here’s another level of complexity: when dealing with visuals for large-scale immersive screens, previews can only tell you so much. You can only really know whether or not the visuals are working 100% once you run them on the actual screens. “There are many things we can't predict and check enough in VR previews. I think the best way is to see and adjust the work on the real site each time,” said DARUMA founder Masako Nishi.

Just exactly how high are the resolutions that DARUMA works with? 8K. Rendering 8K visuals on your own machine will probably take…let’s not even bother. DARUMA didn’t. They enlist the services of cloud render farms for every project.

For their work for the Japan Pavilion at the Dubai Expo, DARUMA went with GarageFarm. “Local rendering wasn't a good option as it was 8K or even larger and it seemed never finished in 24 hours, so rendering locally wasn't our option,” said Masako.

This project was particularly difficult for DARUMA. The concept for the Japan Pavilion was to provide a glimpse of future urban life on Earth. The project required an output of 10,000 pixels of photorealistic forests, underwater scenes, and futuristic cities. “In addition to making a good appearance of water and animals, we were conscious of the composition so that they would not look unnatural and that the eyes of the user could be guided,” said Masako.

Another challenging project was the Eneos showcase that Masako and her team did for the Tokyo Olympics. The brief that the director gave DARUMA was to make viewers feel like they were shrunk down by scientists in a lab and they fly around in little hydrogen-powered spaceships that cruise around the futuristic lab and other scenes. What an idea, right? Nice to think about, hell to pull off. “It was difficult to make it not to be unnatural as much as possible. [But] we succeeded in creating an incredible experience that you really feel shrinking, flying in the sky, and watching sports,” said Masako.

With projects of such scale and complexity, rendering becomes even a bigger deal. Not only does rendering affect the final look of the visuals, but rendering speed for huge files can be a deciding factor in whether the project gets delivered on time or not. And for this, DARUMA turns to GarageFarm.

Masako discovered GarageFarm when one of DARUMA’s freelancers recommended it to her so that they could work together on a project. The freelancer previously used GarageFarm for a personal project. While her introduction to GarageFarm may be serendipitous, Masako’s continued use of our online render service is more conscious.

One thing Masako found good about GarageFarm was the compatibility with the software. In her previous experience with other render farms, Masako encountered numerous software and plug-ins that she couldn’t use. Not with GarageFarm. “I was able to render in an environment with no particular restrictions even for the first time, thanks to the very easy-to-use UI,” said Masako.

While GarageFarm’s 24/7 support team is often mentioned by many of its clients as a strong point of the render farm, Masako has a unique reason for loving it: the ability to chat in different languages. “To be honest, the reason I chose GarageFarm was there were many languages supported,” Masako said. DARUMA works with many artists from across the globe and having support that can engage their staff in different languages can really help make things go smoothly, especially in situations where there’s an issue that the team is trying to resolve.

‍“Our staff communicated with the support team. I was surprised that the language for corresponding is a variety and the speed of feedback was very good. It was very helpful,” said Masako.

Another thing that Masako particularly liked about rendering with GarageFarm was pricing and volume discount. “Since we deal with many large-scale works, it is very attractive to have a lot of volume discounts. Even in the case of small work, I think it is a good price range because the unit price will decrease in long-term use,” said Masako.

As CEO of DARUMA, Masako has to keep a close eye on costs if the business is to be healthy. She has found GarageFarm to be a cost-effective way to render their projects. And when issues were encountered (as it inevitably does when dealing with rendering), Masako loved the workaround from our render farm. “They returned the credit for the rendering time that there was a problem, so it was not wasted. As a result, it was good that all the works were completed within the budget,” said Masako.

Aside from projects in their current pipeline, Masako is involved in an animation project she’s excited about. All she would tell us about it is that the work will be “incorporating the experience of traveling between real and digital.” That’s intriguing, and after seeing how DARUMA executes larger-than-life projects, this future project is likely to be mind-blowing.

Other areas that Masako is excited about are 3D printing, AI, and NFTs. “I feel that the distance between the users and the creators will be getting closer and closer, and it makes me more excited,” said Masako.

If she’s excited, then so are we.

If you want to learn more about DARUMA studio, you can find them on Instagram @darumajpstudio .