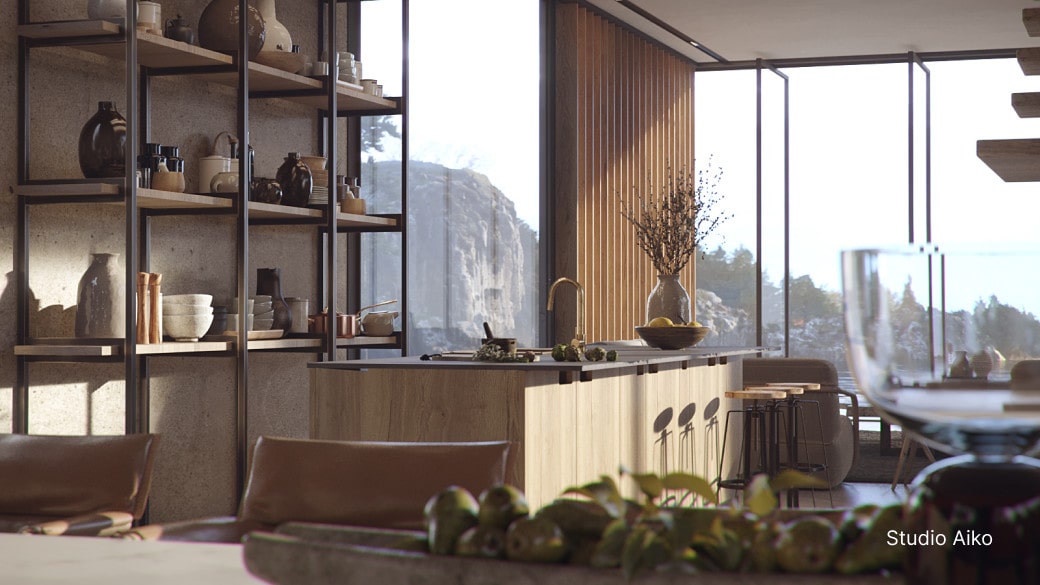 Hyper-realism is often proposed as the holy grail of computer graphics, one of the most challenging and complex types of art to create because of the time, budget, and resources realism requires. Studio Aiko confronts these challenges head-on to make some of the most compelling environments in the industry. In this article, we hear from Meny Hilsenrad, co-founder of Aiko, about the process of creating and rendering realistic environments for real-world clients.

Meny started Studio Aiko in 2005 with his business partner and fellow artist Yair Alony after first being a hobbyist and then working professionally in the animation industry.

‍"I started with CG as a hobby when I was 15 years old back in 1992. I worked with Autodesk 3D Studio 2.0 for DOS for fun without any plans initially to work professionally in the animation field. When I was 21, I had my first opportunity to work in an animation studio working on broadcast projects. I gained a lot of my first experiences in things related to CG there.”

‍“In 2005 together with Yair Alony, who was my colleague in an animation studio, we decided to open our own animation studio. We called in Studio Aiko, and we have been working together for over 17 years and hopefully for many more years to come!"

Studio Aiko specializes in hyper-realistic CG for archviz, commercials, and product rendering. Their portfolio includes work for clients like Adidas, Huawei, and Kodak, alongside dozens of architectural firms.

Despite their small team, Studio Aiko regularly works on projects with demanding render needs and deadlines. The current project they're working on is no exception.

"We are currently working on several interesting projects. One of them is an in-house project which will be finished in the next couple of months. It's an architectural animation project, and the shots there are quite complex to render. I believe that at some point, we will use your service in order to speed up the rendering and make it ready sooner."

Studio Aiko uses our online render farm for rendering their larger projects to speed up project delivery and simplify their project pipelines. The team uses our renderBeamer plug-in to integrate rendering into their workflows tightly. The plug-in helps to keep things simple by handling project uploads and frame downloads automatically. Meny told us that these advantages help to produce the bottlenecks that rendering can create when they're managing multiple projects at the same time. In fact, it has allowed the studio to take on even more work.

‍“The simplicity of the plug-in makes sending the project for online rendering feel like we are using our own local render farm. You can hardly feel the process of uploading and setting up the scene for external rendering, and when the project is done rendering, it's automatically downloaded to our server.”

‍“The ability to send and receive renders 10x faster than we would if we rendered them locally gives us the ability to meet deadlines and to work through several projects in our pipeline at the same time. Today we know that we can take on several projects at the same time, some of them might be on a tight schedule, and we can still handle them thanks to the possibilities we get with GarageFarm.NET.”

GarageFarm for realism on a budget

Meny also told us a few things about why he picked GarageFarm’s render farm services. GarageFarm adds minimal overhead to post-production and, according to Meny, almost never has errors. And when there are hiccups, support is always ready.

‍“After years of experience in other rendering services, we found that yours is the most simple and easy to operate. The process of sending a project to your render farm involves almost no errors, and in rare cases when it does happen, we always get a quick response and help throughout the problem.”

‍“There were some issues in the beginning while studying the workflow of the renderBeamer plug-in. But most of those issues were simple, and your online tutorials helped us solve them quickly. There were 2-3 complex issues I stumbled upon which I couldn't figure out on my own, so I used your real-time chat support, and they helped me solve the problem.”

A typical project for the studio involves six to eight HD or 4k shots and some high-resolution stills. Most renders are for use in architectural visualization projects or for use in product commercials.

‍“It's hard to estimate in terms of frames how much we've used GrarageFarm's render service as we sent lots of projects to render in the past three years, but I believe that we've sent around 15 animation projects. The average time to render one frame is approximately 30-90 minutes on average, depending on the complexity of the scene and the frame resolution.”

The studio’s software package of choice is 3ds Max and Corona Render. 3ds Max is a staple of the CG industry and Corona render has slowly become one of the most preferred render engines for architectural projects and product rendering because of its mixture of biased and unbiased rendering tools and strong feature set. GarageFarm fully supports Corona for both their 3ds Max  and Cinema 4D render farm.

‍“One of the main plug-ins we use in our pipeline is Corona Renderer by Chaos Group. We use it constantly and love its quality, ease of use, and constant development of it. Another plug-in we love is Tyflow by Tyson Ibele. It gives us an excellent solution for everything involved with particles and simulation. The constant development and frequent updates are impressive. We no longer need to use 3rd party software to achieve great results, which is a significant advantage in our working process.”

Thanks for talking with us Meny! The work done by Studio Aiko, Meny, and Yair demonstrates the phenomenal potential today’s modern tools have when placed in the right hands. From hyper realistic renders, to their impressive client list, Studio Aiko has achieved a lot in their 17 years of business. If you’d like to try using the same tools that Studio Aiko uses to render their projects, visit our Corona render farm and get started with $50 of free render credits.

To learn more about Studio Aiko, visit studio-aiko.com or find them on Instagram @studioaikovfx.