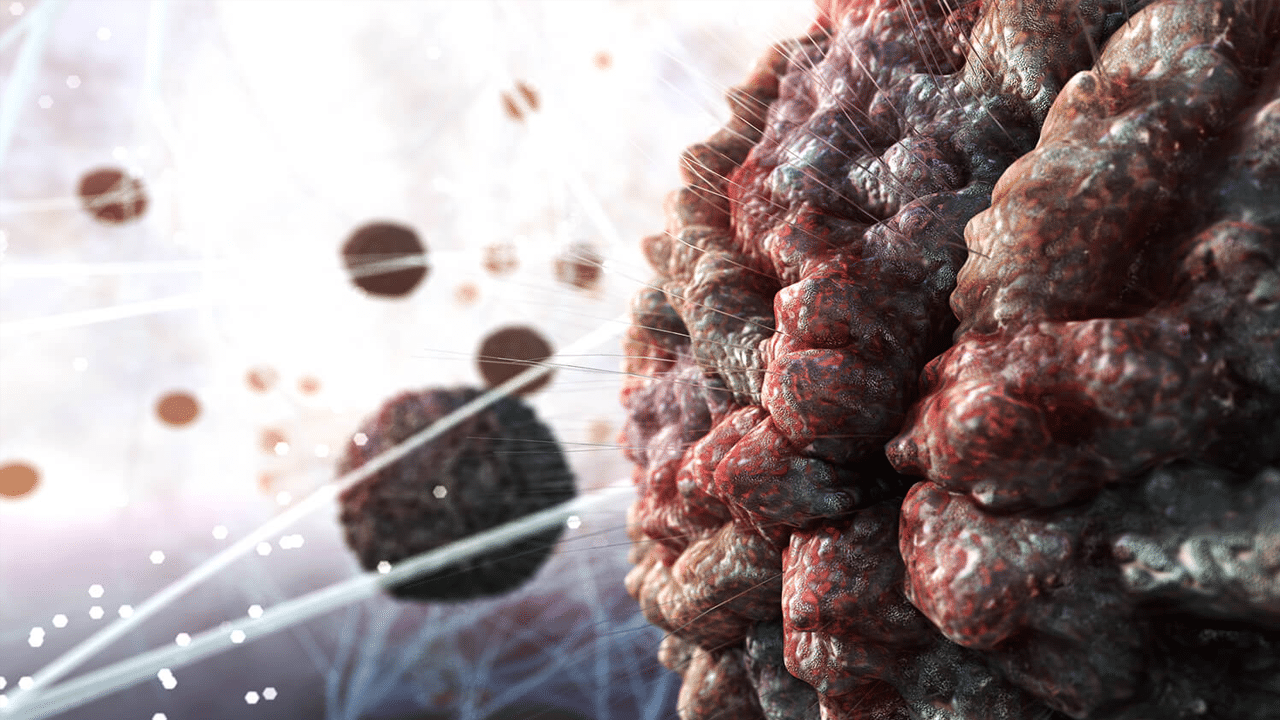 In this short but substantial case study we sit down with Brad Baxley, the man behind scientific visualization studio, Part to Whole. Brad offers his services to groups working in various fields of research science, and uses MODO to create stunning CG representations of anything from molecules to X-Ray components. As a visual artist at his core, Brad realizes the structural detail of microscopic particles with a keen aesthetic sense, and presents them in a way that would make even a layperson marvel at the complexity and beauty of the unseen microbes that comprise, and exist alongside us. His passion for art and the sciences show in his work. He describes 3d as “a lightsaber for creative minds” and of its efficacy as a visualization tool, he says “CG is so powerful in terms of letting us imagine the world around us that’s too small or large to see. It really helps us put things in perspective and understand better where we are in the big picture”.

Brad found his way to us in 2009, which was in the earlier years of GarageFarm.NET as well, and having returned, was pleasantly surprised at how we grew as he did. He says ” At this point, (GarageFarm) is an integral part of my workflow. The new tools simply make things seamless”. In the case study he talks about his latest project with us, and how having a render farm he can rely on is essential to his work.

A few words about yourself and your professional work?

I’m Brad Baxley and I live in Tucson, AZ.
I currently operate a digital art studio called Part to Whole. Part to Whole is somewhat unique in that it focuses primarily on facilitating and elevating research science – generally at an institutional level.

That’s super interesting. Can you tell us more about the studio and its beginnings?

It was pretty organic. Out of grad school in 2010 I started working as the in-house modeling and visualization specialist at a physics institute in Boulder, CO named JILA (Joint Institute for Laboratory Astrophysics). After a few years I decided to start my own practice with the hopes of opening my services to a broader research base. And it feels good to be doing it for something I think is a worthwhile cause.

Oh man, haha, I’ve got a pretty wide range of interests. Most of them orbit making something. I started out as a painter and it still constitutes a large portion of my creative efforts. I sew everything from custom gear to clothes and work leather as well. I like to try to keep a solid balance of analogue and digital experiences. I’m an avid backpacker and kayaker and my bike is my best friend. I’ve recently started trying to grow my own food, but AZ is tough. I’ve got a thing for hardware stores.

Through the years I just gravitated towards CG. I’ve always been heavily influenced by the visual aspect of life. This kind of tool is a light sabre for creative minds. I’m still amazed every day at all I see folks doing with it.

My first exposure to CG was in school studying architecture. In addition to digitally designing spaces, the art of rendering was equally important. At the end of the day, architecture is a practice that deals primarily with conveying ideas using visual conventions.

I completed my undergraduate studies at Clemson University and my graduate work at The University of Pennsylvania.

Where did the interest in science come into the picture?

Science, was always an interest. But like I said earlier, ending up at JILA in Boulder was quite random. However, I feel very fortunate to have been afforded the opportunity to step into this world. It’s an incredibly vast yet underserved network of disciplines that stands to gain a lot through the capabilities in CG environments.

I get a lot of really complex stuff coming in the door. What’s going on in labs all over the world is pretty mind blowing. There is always a learning curve – for every project. While I’d say this is the most challenging phase, it’s also one of the most fun. This is when I really get to forge a relationship with the groups I’m working with. Diving into their research and hearing how stoked they get when they describe it… it’s the best. I can relate because it’s how I feel about my side of things. It’s pretty powerful.

What’s challenging for your running your own studio? And what’s the future like?

It was a leap to try to depend on it. But a rewarding one that has given me a lot of the freedom I was looking for. It is a beautiful time we live in when all a person needs is a machine, software and an internet connection and they are in business, literally. The freedom is primarily in mobility.

I actually have a few ventures running concurrently. The amount of attention each gets depends on what I’m passionate about at the time, but each also supports and compliments the other. In addition to CG for science, I experiment in architectural and industrial design. Both with a bent for parametric and emergent design practices as well as novel fabrication methods. The boundaries between different practices are constantly disintegrating thanks to new tools being developed which permit us to probe new issues. There’s a lot of great stuff on the horizon to get excited about.

I guess my dream would be to continue pushing these to the point where I can formalize them. A small family of companies that stem from a core approach yet applied at different scales. Each of which is a vehicle to explore something I enjoy. And then teach someday.

Can you say what ventures they are besides Part to Whole? No pressure!

Haha, no worries. I hope to officially register Brad Baxley, un-done industries, Floats, and BaxleyLabs. Respectively, they are a painting studio, a men’s soft-goods/everyday carry company, an ultralight backpacking gear company, and an architecture/digital fabrication studio with more of an academic/r&d emphasis. Most entail a solid combination of both digital and analog processes. 10 years.

Can you talk about the projects rendered on our farm?

:| The recent one is actually under an NDA. It was a large format print (~ 2 m x 1.5 m ) to be used at a microscopy conference. But I CAN say the folks at IDES, inc. have some new offerings coming up that will hopefully be a game changer for atomic, molecular, and optical physicists.

Challenges: This is a great example of the learning curve I was talking about. There was a lot of information to wrap my head around. I found out early on in my career that being able to A. isolate the core of a body of research and B. distill things down while maintaining the essence is where the real work is. And deadline. This one was very finite. It had to be in their hands and on a plane in time to set up for the conference.

Other the most recent project featured an in depth molecular look at the structure of the Zika virus. CG is so powerful in terms of letting us imagine the world around us that’s too small or large to see. It really helps us put things in perspective and understand better where we are in the big picture. So yeah, we just began by accurately modeling everything then started peeling back the layers to reveal a surprisingly elegant structure.

Challenges: For this one, it was structure. I love when modeling and formal logic guide the work. There are a lot of great molecular readers out there, but at the end of the day it usually takes creativity to get all that geometry into a scene. For this project, we basically decoded the virus down to its most basic constituent parts, rebuilt each unit much lighter, and then repopulated the framework with the new components. From there using Modo’s replicators made things a breeze.

Setup: I had everything moderately blasted out to make the displacement maps, GI, DoF, and volumetric lighting pop. Rendering 3000 x 2000 pixels at 300dpi with the below settings, all of my output layers (final color, alpha, and ambient occlusion) came back in under 2 hours. Settings are in Modo.

What was the reason behind outsourcing your work to a render farm?

Time! With the RenderBeamer plugin, it practically feels like I’m rendering (multiple plates) on my own machine, but I get to keep working. Plus, since I do a lot of stills for print, some of these plates would just never get done otherwise. It’s a no-brainer.

We daisy-chained a few machines in slave mode at the physics institute, but the assistance was nominal. I had some pretty powerful hardware there though. Every now and then I could get some time on the supercomputers they were using for simulations. Other than that, I turn to a render farm.

Everything is going cloud-based, for a reason. Gone are the days of triple-double checking before pressing “render”, only to find upon completion (and past any hope of a redo before deadline) that you forgot to turn your depth of field back on… Now I can rerender, at any time, and receive it back faster than I could have dreamed on my machine. All without having to sacrifice processing power on my end. I get to keep working.

I found you when I actually was in grad school – University of Pennsylvania. Information spreads quickly in studio culture, a good thing doesn’t stay quiet long. I think one person found GarageFarm.NET and then basically everyone there used it that year. They might still be.

The first time I used GarageFarm.NET was in 2009 I believe. I can’t remember exactly what I thought then, but I did come back to you guys once I entered the profession. I almost feel like we have grown together. At this point, it is an integral part of my workflow. The new tools simply make things seamless.

Where can people find you on social media?

PtW is on FB Insta and Twitter, but until I can put someone in charge of that side of things I wouldn’t expect many updates. It’s on the agenda though. I’d love to extend the network with a forum style extension to the site about the day-to-day, in-progress entries and rich content hot off the press.

We were delighted to have this conversation with Brad, and are proud to be a part of his process. We make it a point to learn from our customers, and continuously work on our system to provide a better experience for them. You can learn more about Brad and Part to Whole and about our MODO render farm.