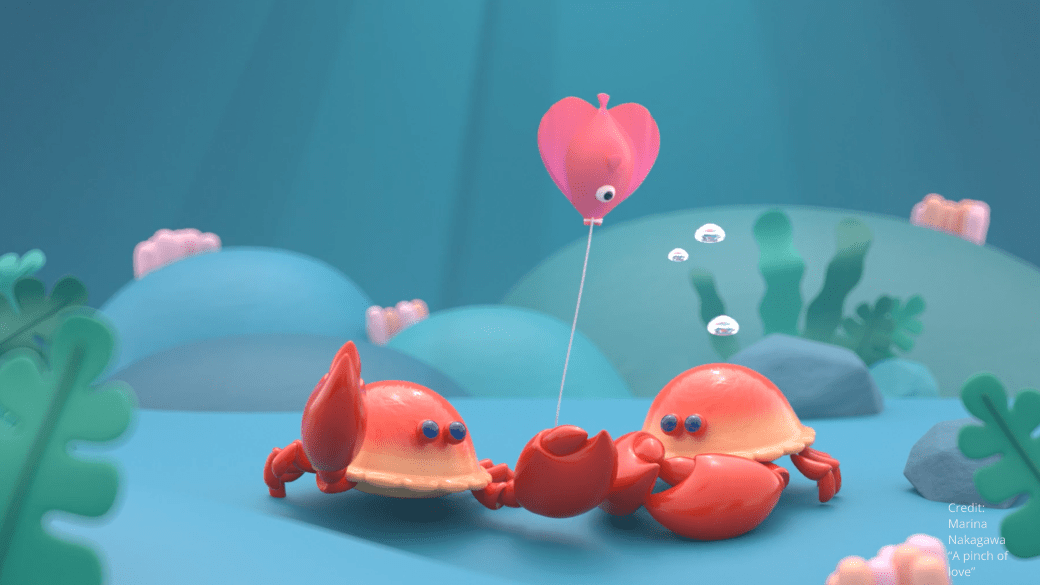 Magic in motion: Marina Nakagawa and her mastery of motion graphics

If there’s a word that can describe Marina Nakagawa’s unmistakable aesthetic, it’s joy. Looking at the snapshot below from her NFT art called Night Garden, Marina’s choice of colors, how she puts a certain softness to the light, the cuddly texture on the little fireflies' bodies, the expression on their faces – all these come together to capture the essence of a smile and put it on screen as a visual.

(If you’re unfamiliar with NFT art, learn more about it here.)

Marina’s touch has a certain innocence to it that even a music video for a rap song can get a comic-book treatment without it becoming corny:

Marina’s work can be whimsical but never weird, colorful and child-like but never gaudy and childish, emotional and poetic, but never cynical:

(Got a project in Cinema 4D that you need to render? Get started here.)

Where could Marina’s aesthetic have come from, one wonders? It could be from her upbringing in Japan; the Japanese are known for a certain quiet, unique, understated style when it comes to design. They are also known for being dedicated craftspeople no matter the craft; the insistence on excellence and attention to detail is clearly evident in Marina’s work.

Perhaps it came from those whimsical and surreal MTV station IDs she saw during her teens. Those could be pretty random, fantastical, and unpredictable; they could have opened Marina’s mind to a certain nonlinear and nonliteral way of expression.

Most likely, it’s a combination of all that plus her continuing work in the UK where she moved after getting married in 2016. She has done a lot of animation work there, from when she first joined an advertising-related studio to when she decided to go freelance in 2019.

Surely no one thing’s responsible for defining such a nuanced style as Marina’s. The one thing that’s for sure is that her style is a delight to behold.

Marina first worked with GarageFarm rather serendipitously. A client once asked her to render a large image for an event, and the client needed it ASAP. Marina admits to not being the most technical person around, so she needed a rendering solution that’s as simple and intuitive as can be. She took a quick look around and tried GarageFarm.

She never looked back. “It was great that it was very easy to understand, such as downloading plug-ins and rendering operations on the web. Also, the support is very responsive. I got a reply as soon as I asked a question, and if an error occurred, I immediately checked the file and responded, so it was really helpful,” said Marina.

For her, speed is the major draw in using an online render farm such as GarageFarm. Remember the first image at the top of this article? That image comes from a looped video that’s 11 seconds long. That animation has a total of 264 frames of multiple light sources and surfaces made of transparent materials. Based on Marina’s computations, it would have taken at least 4 days to render the whole project using her own computer. Using GarageFarm, the project was rendered in a matter of hours.

While speed was the major draw, the support made Marina come back. Rendering is always a complicated process with lots of moving parts and something is bound to go wrong somewhere at some point. Having a team closely monitoring your project as it is being rendered is a huge time-, cost-, and sanity-saver.

“​​I was a little nervous about whether I could actually get the results I wanted, whether the textures and plugins would not break links, and whether they would render exactly the same on the farm. I think it's a feeling like a graphic designer printing a work at a printing shop,” said Marina, describing her early days with GarageFarm. “However, when I actually used it, even if I had a problem, the support was really quick to respond and the result was as expected, so I'm really glad I used it, and I will continue to use it when it’s necessary.”

What excites Marina about the future

Marina is excited about how free yet quality software such as Blender and Unreal are opening up the craft of CGI development to more and more people, especially young people. Combine this with the fact that working remotely is now more effective and more accepted than ever, and a truly global community of artists is possible.

“I believe that Japanese artists will be able to spread their wings to the world, transcending language and physical barriers,” said Marina.

Marina sees potential in AR and the metaverse, and this led her to exhibit some work she did using the GLTF format for the first time. “[While] I felt that there were still restrictions in the expression of materials and lighting, I think that It will allow us to create more sophisticated expressions in the future, and if that happens, I think that more interesting content will appear,” said Marina.

If you’ve noticed in Marina’s reel at the top of this article, she works not just with 3D but also 2D. Here, Marina sees a lot of exciting potential as well. She feels that the combination of 3D with 2D leads to unique expressions that are not possible otherwise. “Since the release of Spider-Verse in 2018, expressions that combine 3D and 2D have become very popular. I think there will be a sudden increase in the number of works that are artistic and unique expressions in the next few years. I think this trend will continue for some time to come,” said Marina.

Marina observed that while animation is a medium that has long been enjoyed by people of all ages in Japan for a long time now, the same couldn’t exactly be said for Europe and the US. In those cultures, there has always been in the past an assumption, or at least a bias, that animation is for children. Not so anymore in recent years. “There are more animations that can be enjoyed in the previous generation that incorporate more artistic expression, and not only the evolution of visuals, but also the story is much more for adults,” Marina explained. She sees this trend continuing in the foreseeable future.

As for her own work, Marina sees herself exploring creating longer films and animations. “I've been making works in short formats of 10 seconds or less, but I would like to challenge myself,” said Marina.

We may not be sure if Marina’s next work will be short or long, but we’re sure it’ll be magical.

Marina primarily uses Cinema 4D, Substance Designer, ZBrush, After Effects, and Redshift. To see more of her work, visit her website, her Instagram, and her Twitter.