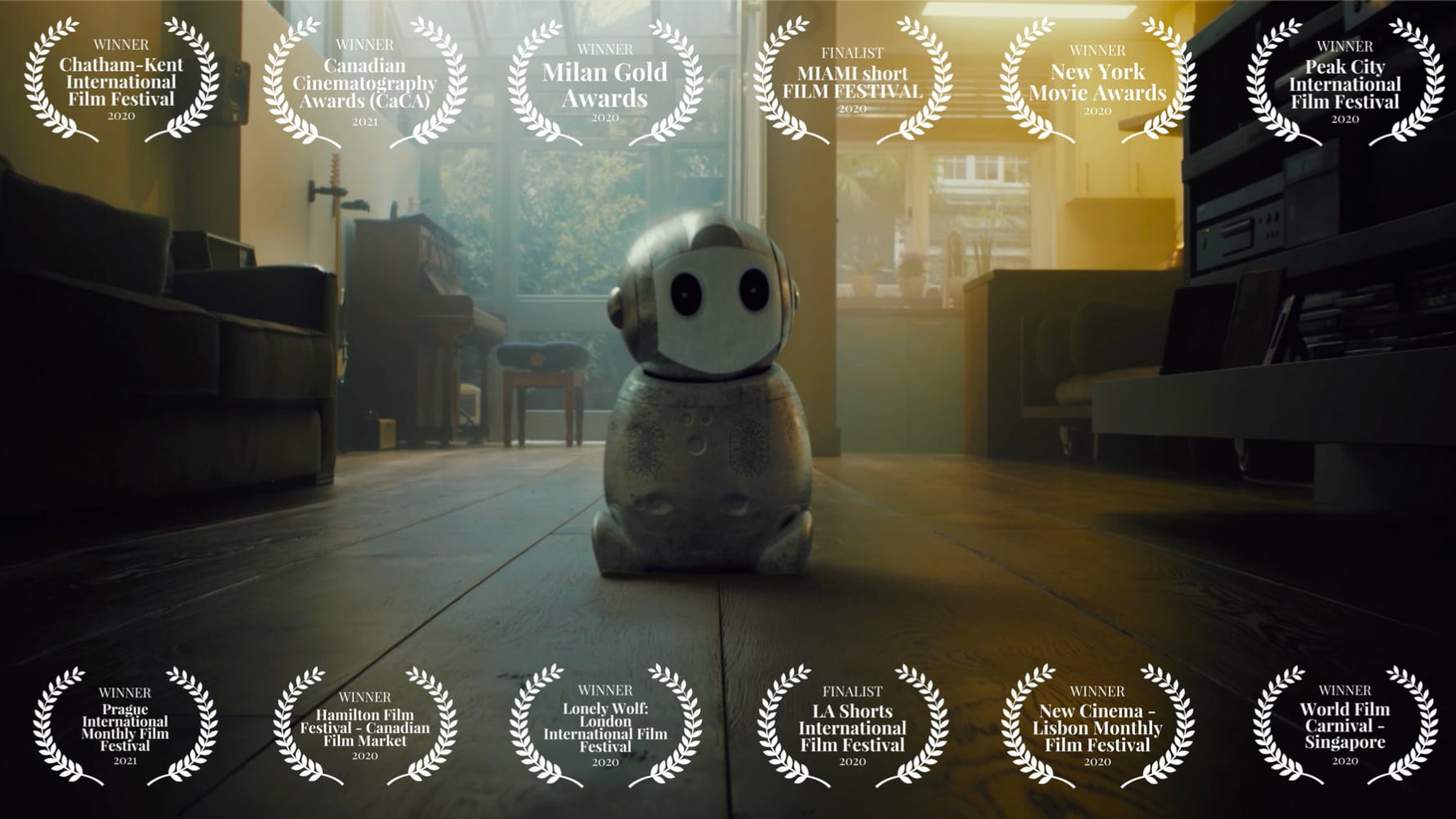 A peek into the mind of award-winning Robert the Robot creator, 3D artist Jonathan Irwin

Watching an animation by Jonathan Irwin is like being fully awake inside somebody else’s dream--it is intriguing, entrancing, mystifying. Everything seems familiar enough, until it isn’t. Yet even when what’s happening is strange, you understand.

For example: his multi-awarded micro short film, Robert the Robot.

It opens with Robert, a robot that’s a lovable intersection between a Roomba, BB-8, and a puppy. Robert looks at the rain outside in the window, with eyes that clearly express longing. How Jonathan achieves this without dialogue is a nod to what we have seen in something like Disney’s Wall-E, which Jonathan has shared is among his inspirations for this short animation.

Like often in dreams, what happens in the film is seemingly simple, even mundane. Robert is alone in the house, amusing himself while he waits for his family to come back home. The family arrives and Robert is happy. The end.

But like in dreams, every moment, even the simplest ones, feel charged with emotion, meaning, and beauty. The way the light falls on Robert’s metallic eyes. The way he interacts with the other toys. The way he turns his head as he greets the family. The way he recognizes the family’s arrival by the car’s headlights hitting the windows.

This dream-like quality that Jonathan so masterfully employs in his animations is not a one-off. Take a quick look through his Instagram and you will find pieces that possess the qualities of visions, daydreams, even nightmares. Military operatives find an outworldly ship in the middle of a forest. Disparate rocks defy gravity to dance to an electropop beat. A crash test dummy gets his day of revenge. Leaves dance in the wind but not in a way any of us has ever seen. In Jonathan Irwin’s hands, the strange becomes familiar. The mundane becomes magical.

Behind the magic is of course, method. Jonathan started playing around with After Effects in 2009 and started dabbling in 3D in 2012. After years of honing his skills, Jonathan has evolved his weapons of choice: he now uses 3ds Max for modeling, and Redshift and V-Ray for rendering, depending on the project. For commercial work where there are lots of revisions and re-rendering, he goes with Redshift for speed. For personal portfolio-building projects, he prefers V-Ray for its aesthetic finish.

For Robert the Robot, Jonathan used V-Ray for 3ds Max, with an assist from from our online render farm. What would have taken 25 hours to render in his own machine took only 2 hours in GarageFarm and that’s on a low priority setting (learn more about priority settings on a render farm here). And this way, he was able to free up his machine to continue working on other scenes as GarageFarm handles the rendering.

However, what makes Robert the Robot special isn’t just 3D. The unique atmosphere that Robert the Robot has is a product of a masterful collaboration between 3D and cinematography. Jonathan partnered with award-winning Director of Photography Aaron Reid. They have previously worked together on a music video and a commercial. The lighting for Robert the Robot was achieved by referencing HDRI images generated in real locations using the mirrored sphere technique. A third collaborator, Charlie Morris of The Mill, color-graded the animation, resulting in a stunning and magical look and feel.

Jonathan discovered cloud-rendering only fairly recently. Before he became a regular of GarageFarm, Jonathan would render his projects on his own computer at home. It took him weeks and months at a time to finish a project, like this music video for Funeral Suits:

Jonathan created this music video in 2013, early days in his 3D career. But even then, his heartful touch is already evident in his treatment. It’s hard to imagine how Jonathan rendered this whole piece on one computer. Good thing he uses cloud rendering now--we get treated to more and more of his heartful work.

Jonathan took a while to start using cloud rendering services because he thought it would cost too much. But after doing a test render with GarageFarm and discovering how much it boosted the speed of his renders, there was no turning back.

For a prolific artist like Jonathan, the speed by which he can finalize projects is key. It’s not just about completing the project ASAP; it’s about preserving the drive and energy to keep creating, instead of it dissipating in a haze of long waits and technical issues in rendering.

“Without the farm, [Robert the Robot] would have been almost impossible to accomplish on a single machine and the project would probably have drifted into oblivion,” said Jonathan.

Speaking of technical issues, they are not completely avoidable when it comes to a complex process like rendering. But whatever issue Jonathan encountered in the many times he has rendered with GarageFarm, it was quickly resolved by the 24/7 support team.

“[There was an instance] where my scenes were not fully optimized, causing memory issues that crashed the render. This was caught by the support team. In other cases where I received unexpected frames, the team was happy to re-render for me at no extra cost,” said Jonathan.

The future of 3D

The prospect of near-real time rendering excites Jonathan and for this reason, he thinks Unreal Engine is going to be a disruptive force in the 3D industry. But while it is exciting, he thinks that the technology is not quite there yet and we won’t be rendering in near-real time on single GPUs anytime soon.

One thing he wishes cloud-rendering services can offer is simulation. For now, he is limited to running simulations on his own machine, leading to significant downtimes. He dreams of the day when he can submit a massive Phoenix Fluid Dynamics simulation and let 100 nodes of a cloud farm handle that like how they do it for a render.

If dream-weaving Irwin’s dream does come true, what kind of visions, enigmas, fantasies, images, and stories would that unlock for him?