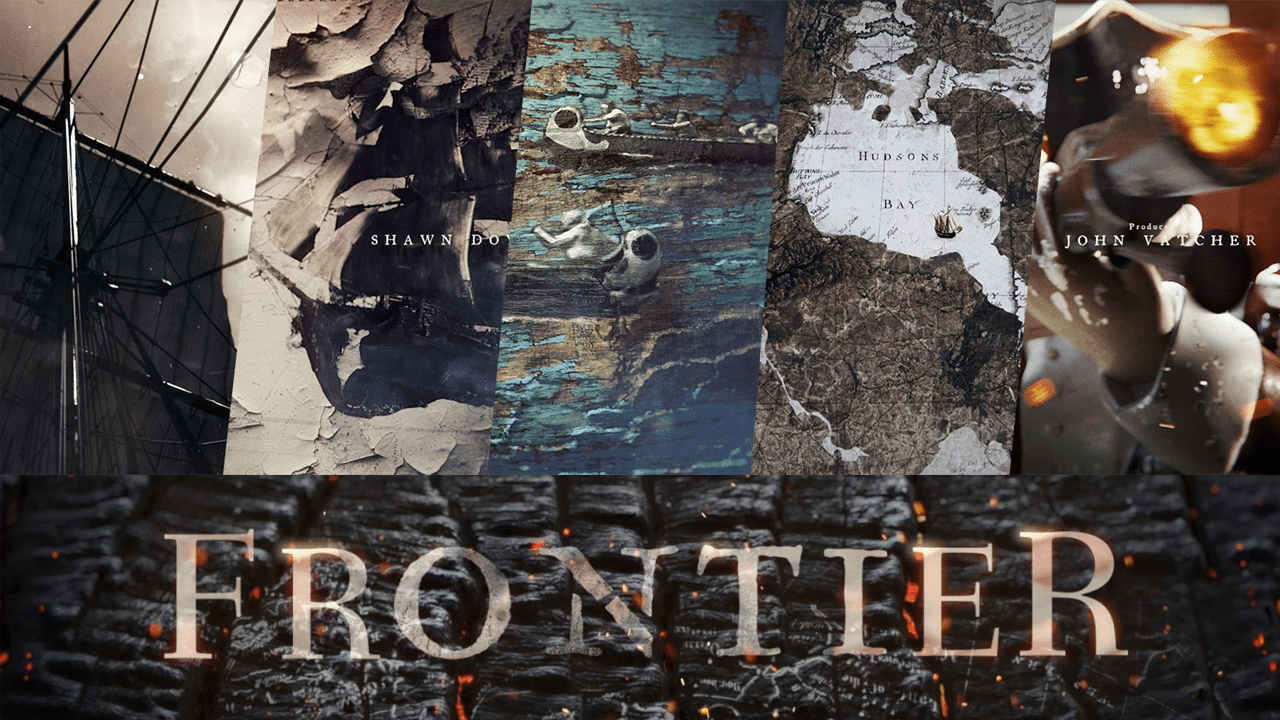 In the following interview with Iamstatic co-founder Dave Greene you’ll be whisked off on a voyage of digital discovery, first into the not-so-distant past with the relatable beginnings of Iamstatic, the talented Canadian CG studio born when the internet was just approaching its tweens; an online world where Flash animation was king, and the implosion of the dot-com bubble was still painfully fresh in the minds of many an online business venture. With the obligatory but no-less-interesting origin story out of the way, you’ll soon find yourself discovering what makes the small yet mighty studio tick.

Before ya know it, a mere blink later we’re going behind the scenes of one of Iamstatic’s latest projects, the compelling and darkly intriguing title sequence for Netflix’s historical drama series, Frontier, to investigate exactly how the project came to be. Including the tech involved, inspirations, challenges, and of course how long it took to render on GarageFarm.NET's render farm.

Needing to keep their team small and nimble, Iamstatic discovered us through the power of word-of-mouth, and on looking into our render farm were soon convinced that this was the place for them. A decision of course helped by the affordable pricing, and the friendly actual human support available 24/7 through live web chat, Skype and email, even on public holidays.

The studio have continued rendering their various projects with us ever since the success of their Frontier titles, and as a thank you Iamstatic have excitingly provided the cherry on the top (well, bottom) of this interview, in the form of an appealing otherworldly surprise to send you off with. That said, let’s get stuck in shall we!

From the get go we always had someone helping us through any questions. Even after rendering many jobs, I still run into things I need help with and I never have to wait for a fix. It is refreshing to get to know the people behind it all, you develop a rapport with them, and in doing so the GarageFarm.NET crew almost becomes part of your team.
DAVE GREENE

We are Ron Gervais and Dave Greene. We both live in Toronto Canada.
We are the managing partners, and creative directors at iamstatic.

What do you do in your free time when not working?

We mostly think about personal projects and original IP. Outside of “work” related things, we both play music and have been avid video game players for years. We also both have families and they are what we care about most of course.

Can you talk about your initial experience with CG and what led to it?

Our first project in CG was a personal short. None of us had ever used 3D to any extent and decided to make a two-minute piece. Needless to say it was both a disaster and a great achievement. What led to this was working in the early days of Flash, experimenting with animation, it was a natural transition for us to move our storytelling into a CG environment.

Can you tell us about Iamstatic? Its beginnings, location, and the team.

It is a long history that started back in university. We both went to school in Halifax at NSCAD to study fine art. There iamstatic became an online gallery where we experimented with code, animation, web design and collaborated with other artists on curated projects.

What’s Iamstatic’s forte and the type of projects you take most pride in?

We always try to inject some narrative to our projects. A sense of story is very important to us and helps to make the work more meaningful. I guess all of our title work means the most to us because it is where you get to bring a lot of your own ideas and story to things.

Can you talk about the most meaningful project to date you guys worked on?

It is hard to say one over the other, as they all kind of influence each other from project to project. Three projects that came one after the other for us were:

These projects all influenced each other, and each lead us to the next. The FITC titles was an original short by us, and was shown during the pitch for Crimson Peak. Which I feel the tone of those two pieces lead us to getting the Frontier work. We have always said the personal projects, and ones with story, are what lead you to the work you get. And this is a great example of that.

We are a small studio. In fact iamstatic was a directing team for a long time, and over the last year and a bit we have moved towards building our studio. We have started to add directors to our roster who we collaborate with, or act as the production company for them on projects. We want to keep a core team who share the same interests and philosophies as us.

Can we talk about the recent projects rendered on GarageFarm.NET? The title for Frontier being one of them.

We worked with our friends at Intelligent creatures in Toronto, who brought us in due to our past work on other titles sequences.

Our involvement was to pitch and execute the creative for the titles. Intelligent Creatures were doing some VFX shots for the show, and asked us if we would like to pitch for the titles since it is more in line with what we do.

How much creative freedom did you have on this project?

The amount of freedom on a project usually is pretty open. You of course have to take the client’s needs into consideration, and find ways to tell your own story. We always feel that they are coming to us because they are looking for an interesting way to tell their story, so we never hold back on hopefully showing something new and interesting.

The reception of the title has been pretty good we feel. It has had many views and we feel pretty proud of it.

The other project, while I can’t say much about at the moment, is a complete 180 from the last. It’s very colorful and otherworldly, and is not a title sequence. Which is nice for us because for some reason we seem to do very dark and moody stuff! We are happy people I promise :)

What did you find was the most challenging aspect of the Frontier title?

Due to the topic of the show, there were a lot of opinions on what it needed to be. How much story to reveal and in what way. We actually had a lot of shots that we cut out along the way.

Can you tell us some more about the tech details and tools used?

We rendered just over one minute of footage for this project. Typically we tackle most projects in 3ds Max, as it always proves itself with small teams, and on this project it was a core team of three. We rendered shots in V-Ray and Corona. Frame times varied a lot between shots, but with really complex scenes render times between a half hour and one hour was manageable. Some Shots were much less though. It really depends on what is in the shot.

What was the reason behind using an external render farm for this project?

With the Frontier titles, we knew we had to keep the team small and nimble. Part of that meant we needed a solution for rendering. We just don’t have the time to manage problems with renders on the farm. It was actually the first project we did with GarageFarm.NET and it was refreshing to have the power of a larger studio in our hands.

I don’t really see us having a large in house farm anytime soon. I don’t really see the point anymore. We may have a few blades to chew through some shots, or do look development with, but when it comes to the long shots I like having 24-hour support through GarageFarm.NET, and the ability to scale up at any moment.

How did you find GarageFarm.NET? Anything in particular that made you choose our service?

A friend of mine who has used cloud farms before had heard of GarageFarm.NET but never used them. So I looked into it, and I liked the story of how they began. From a small team who knew production and decided to make a service and grow the business.

There are people there 24/7 to help, and I never have to wait for things to get resolved. I remember leaving a setting on a camera that I shouldn’t have which caused render times to be very, very long and costly. I talked to the GarageFarm.NET team and they took pity on me, and within a few days they added it to the sanity check when submitting shots.

When we decided to go with GarageFarm.NET, we could tell right away it was the right choice. From the get go we always had someone helping us through any questions. Even after rendering many jobs, I still run into things I need help with and I never have to wait for a fix. It is refreshing to get to know the people behind it all, you develop a rapport with them, and in doing so the GarageFarm.NET crew almost becomes part of your team. And I feel that is how they approach you as a customer.

Having the burden of maintaining a render farm is not an easy task. It is not something we felt as a small studio we wanted to tackle. We would rather spend our time on making the work and not stressing why something is not rendering properly. We have seen the benefits on all of our jobs. Even recently when we decided to switch render engines (Which is always a tricky thing to dive into in production) the GarageFarm.NET team actually took the time to work through workflow problems with us. Problems on either side don’t matter, they just get solved.

At first it was uncharted territory for us. But as I said there are people there 24/7 to help. I would also like to point out that I think GarageFarm.NET is a very fair price compared to the competition. It was also why we are committing to this service.

Our funny stories are NSFW. If you want to hear them, you have to come by and have a drink with us :)

Where can people find you?

Our doors are open if anyone is in Toronto and wants to come by. But we can be reached through our contact page at iamstatic.

We have since rendered many other projects with GarageFarm.NET, and there are more on the way.