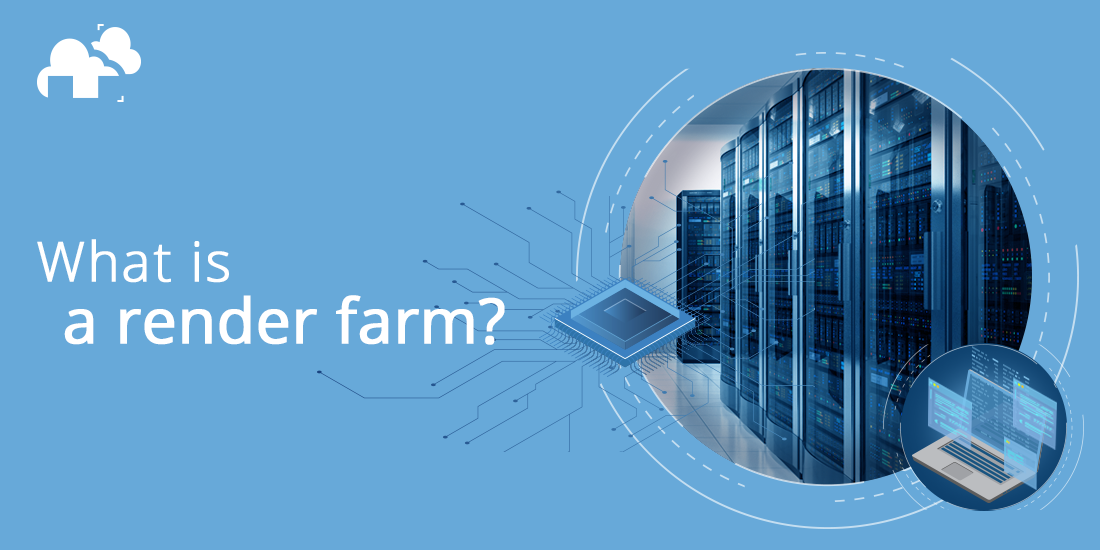 We all have an idea of what a farm is. It’s a place for mass producing something--be it crops, meat, even internet trolls.

But rendering? Hmm, that one can be a little vague for some of us. So before we answer what a render farm is, let’s first tackle what rendering is.

Rendering: from formulas to flowers

Rendering is the last step in the creation of 3D graphics. Rendering takes all the information of the 3D world that the graphics designer created and maps all of that 3D data into the 2D pixels of your monitor, TV or mobile phone screen. This video explains it well without being too technical.

Rendering basically tells each pixel of your screen what color it should be for every frame in your animation. While that sounds simple, it’s actually driven by a complex mathematical formula, as this video shows. And from these calculations come the beautiful, action-filled, and magical graphics that we all enjoy.

Rendering time can vary a lot, depending on the design. Since rendering is solving for the value for every single pixel in your huge-ass 4K LED TV (8.3 million pixels means 8.3 million math problems for your CPU to solve) it’s needless to say that it takes a lot of time, especially if you’re going to use a single computer. Rendering a single frame for a movie like Toy Story 4 ranged from 60 to 160 hours! If Pixar rendered this on a single computer, mankind will have never seen Toy Story 4. (Side note: the evolution of Toy Story is itself a kind of history of 3D rendering. Learn more here.)

And this is where render farms, like GarageFarm.NET, come in handy. And when we say handy, it’s a total godsend to 3D designers. Because going back to our original question, a render farm is a huge collection of machines harnessed together to do one thing--render your 3D frames. By tapping into the power of render farms, your 3D projects can meet deadlines that are set the next day, the next week, or the next month, not the next generation. What usually takes days if you try to render on your own machine can now be completed in just hours.

How do render farms perform this sorcery? No magic is involved, my friend. Just nodes. Node is another word for a computer that is part of a host of computers whose sole purpose in life is to render. These nodes are controlled by a render management software--think of this program as the render overlord that tells all the nodes what to do. Each individual node can be instructed to render an individual frame, allowing multiple frames to be rendered at the same time.

You’ll appreciate this better with an example: imagine if you have a 10-second animation running at 30 frames per second. And let’s assume that a frame takes 1 hour to render. This will take you 300 hours to render if you do it on your own computer. That’s almost 2 weeks!  But if you send your project to a render farm, 100 nodes can render your whole project in just 3 hours. Plus, in those 3 hours that you’re waiting for the render to be completed, you can use your own computer to continue working or perhaps to take a break and complete a few quests in Cyberpunk 2077.

But that’s not where the magic ends. Each node can also be instructed to render just one part of one frame that later on can be combined into the final image. This flexibility is the reason why render farms are such a great choice for both animations and high-resolution still images.

Why online render farms are awesome-r

To harness the power of render farms, you have to be connected to one. The thing is, most 3D designers don’t just happen to have a neighborhood-friendly render farm nearby. So let’s say you’re working from home designing wondrous graphics, how can you tap into a render farm and render your projects in time for your deadline? The answer: online or cloud render farms. Cloud render farms like GarageFarm.NET allows you to access monstrous computational power to render your 3D frames really fast remotely. At GarageFarm.NET, accessing our rendering systems is almost as simple as logging into your Facebook account:

- Register and test our service

- Download and install our plugin for your 3D software

- Access our render farm right from your 3D app interface!

As with any technical and computational process, a lot can go wrong in rendering, especially when the deadline is approaching. Maybe your version of the software is not compatible. Perhaps there was an error during file transfer. Or maybe there’s no plugin support. There are a million things that can go wrong and it only takes one to get a failed render. Bummer.

At GarageFarm.NET, you get a dedicated team of render wranglers, administrators, and developers available to you 24/7 to help out with any issue that may arise during your render. Operative word: DEDICATED. You get a whole team just watching your render closely for you. It’s like you yourself are there at the farm.

Maintenance is a b*tch

What’s that? You can build your own render farm? Hey, that’s amazing! By all means, set it up and render away. However, it’d be douchey of us if we didn’t point out that powerful computers require time-consuming and costly maintenance. You might find yourself all tied up in maintaining your expensive machines instead of using that time to design.

And this is where render farms give you another advantage--you never have to worry about the maintenance of multiple computers.

If you’re game to use a render farm now, know that with GarageFarm.NET, you have control of how much you spend. Check out our pricing options depending on your needs and preferences.

If you want to learn more about render farms, read the article How to use online render farms. And if you want to geek out some more on anything and everything 3D, check out our YouTube channel.